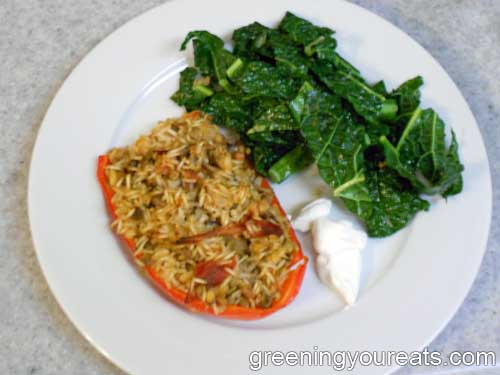 Like our kedgeree experiment, this recipe is an adaptation from a failed Classic Vegetarian Cooking attempt. Theres just something about those recipes where we dont like the end result, but are inspired to make something similar (and better, if I do say so myself!). The original recipe called for eggplant instead of mushrooms, which is fine if you like eggplant, but it also turned out too sweet and not savory enough for our tastes, so we made a lot of adjustments.
mushroom stuffed vegetables
Mushroom and Brown Rice Stuffed Vegetables
Ingredients
stuffed vegetables ingredients
8 oz crimini mushrooms, sliced into small chunks
1 onion, diced
4 cloves garlic, minced
3 Tablespoons olive oil
1 cup brown rice, uncooked
1-½ cup vegetable broth
2 large tomatoes
1/3 cup pine nuts
1 large bell pepper, halved and seeded
Dried rosemary, to taste
Dried parsley, to taste
Dried oregano, to taste
Salt and pepper, to taste
Instructions
Pre-heat oven to 375 degrees Fahrenheit.
Put oil, mushrooms, onion and garlic into a large sautée pan with a lid (we dont have a cover for our skillet, so we did this in a stock pot) and cook over medium-low heat for ten minutes, stirring regularly.
cook oil, mushrooms, onion and garlic in a sautee pan
Add rice to pan. Cook for two minutes.
Slice tomatoes in half, scooping out flesh with a spoon.
Add broth, tomato flesh, and pine nuts to pan. Cover and cook for ten minutes.
add broth, tomato flesh and pine nuts to the pan
Add herbs and spices to mixture and remove from heat.
Drop bell pepper in boiling water and blanch for 30 seconds. Remove from water and place face down on a plate or paper towel to drain water. (Note: I dont know if this step is strictly necessary. The original recipe called for 3 minutes of blanching, which, in my world, is called boiling, but 30 seconds is just fine.)
Spoon mixture into bell pepper halves and tomato skins. Bake at 375 degrees for 25-30 minutes.
spoon mixture into bell pepper halvesbake at 375 degrees for 25-30 minutes
Serve immediately with a tablespoon of labneh. The recipe makes 4-6 servings, and runs just under $2 per serving with all farmers market organic ingredients (except the rice, broth, mushrooms, and pine nuts, which were Trader Joes and Whole Foods organic ingredients), including an extra bell pepper to use for leftovers the next day.